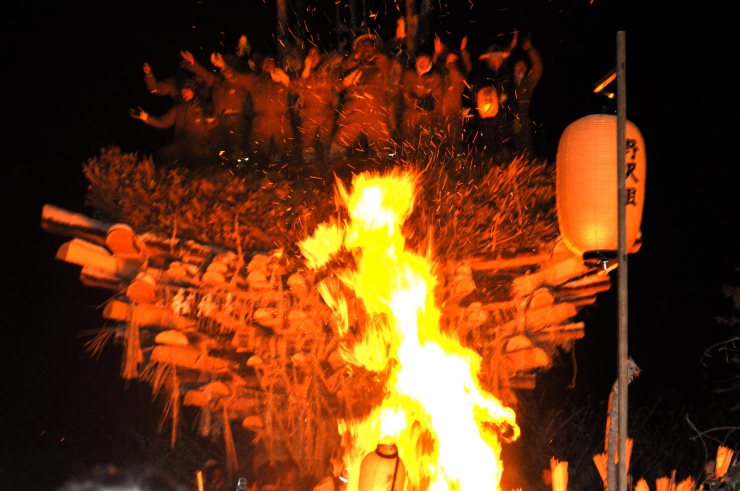 Pictures don’t lie.  This is what it appears to be.  A large bonfire with people on top, making a mad dash out of hell.  But it was taken in Japan, in the tiny mountain village of Nozawa Onsen and so really, there was nothing to fear.  The Japanese put on incredible shows during their bizarre festivals and yet you know every aspect has been planned, organized and practiced and the risk of injury has been almost eliminated.  Every January 13th – 15th, the villagers of this tiny town re-enact an ancient ritual.  Sacred trees are felled and dragged into town where the 25 and 42 year old male villagers construct an intricate wooden shrine pavilion seven meters high and eight square meters wide.  This is serious construction business and its done in silence.  It takes two days to build and is completed on the morning of the 15th, the actual festival.  The festival is called the Dosojin Fire Festival and it takes its name from a folk deity believed to ward off danger near the village boarders.  These male and female statues are constructed out of various materials and its hard to walk around the corner without seeing another couple.

A large group of Tokyo friends with husbands and children made the trek to this snowy destination for a weekend of skiing, fire and fun in the snow.  We stayed at a great ryokan called Sakaya.  I love the way they welcome their guests:

and right outside the entrance was a foot onsen waiting to warm the feet of frozen skiers.  After a “delicious” dinner of typical japanese delights (fish guts and other assorted body parts) we made our way as a large group down the charming snow covered narrow roads to the festival, about a 10 minute walk from our inn.  Surrounded by spectators (most of which had an Australian accent as this is their summer vacation and many many Australians flock to the Japanese Alps for ski vacations) was this huge ark like structure encircled by the 25 year old men at the base while the 42 year old men sat and stood on the top, occasionally throwing branches at the townspeople below.  There were others bearing torches whose job it was to burn the structure down.  The young men protecting it tried their best to hold them back.  This give and take lasted over an hour until the townspeople broke through the line and set the structure on fire.  But not of course until the 42 year old males made a careful descent down their twig ladder.  I’m sure the sake consumed by all involved helped the fire to burn.  And burn it did.  It was a cold dark night that soon turned the skies light and the spectators warm.  Golden sparks lit the skies like firecrackers on the fourth of july.