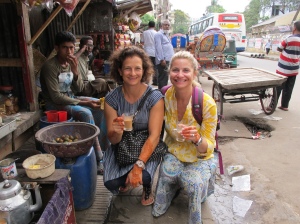 That was the response I got every time I told someone I was going to Bangladesh. And it usually came after an awkward pause where the person would squint their eyes and try to figure out if I was telling the truth. I had a feeling this might be the case when I booked my flight in May the previous year and so I waited for months before I actually told anyone besides my husband. My response to the question would always depend on the day I had and what remained of my patience level at that particular moment. On a good day I would say that it was a long story but that it had to do with a friend whose parents were expats in Chittagong many years ago who had built a play park and rec center, recently passed away and I was going back with her to check on the school and find an NGO in country to help manage the day to day finances. And sometimes, when I was feeling unsure of the decision myself, I defensively said I was going on an adventure. The first answer received some ah’s and oh’s and some head nodding although you could tell what they were thinking was “I never quite pegged Lisa as a 3rd world volunteer” but the second answer was almost like a throw down, challenging them to respond in a negative way to a 48 year old mother of four in Rye, New York who wanted more adventure in her life. I could only imagine their internal dialogue. “Was she having a mid-life crisis? Who goes to Bangladesh for an adventure? Why not run the marathon or start to row crew?”

I wasn’t always an adventure traveller; in fact my first trip to Europe wasn’t until I was in college. We took vacations when I was growing up but never venturing further afield than a Caribbean island or the ski slopes of Vermont. And when I had my own children, I wasn’t the type of mother who with four small children would plan trips to Thailand or The Great Wall or even California. We spent our school vacations in Florida or Windham, sometimes skiing out west. The thought of running after children in the Louvre didn’t hold much appeal. Our first family vacation to Europe didn’t happen until the summer of 2007 when my oldest child was 16 and my youngest was 9. But then in 2008 my husband was transferred to Tokyo and as we passed through immigration and the officer opened my fairly empty passport to stamp my entry to Japan, the portal of change opened wide and the possibilities for adventure unfolded.

Living as an expat can be highly lucrative as most of your major expenses are covered by your company like rent, utilities, education, club membership, flights home, … so in theory, if you were a savvy and responsible adult, you could return to your home country years later with a very comfortable bank balance. Instead, my family returned with double thick passports due to the extra pages we had to add to hold all the stamps and visas we collected in our four years in Asia. Something happened to my husband and I living so far away from our normal existence, it was like a wake up call to our lives. We were in our mid-forties, we were healthy and we’d made it through the tough, physically demanding baby raising years. And we were living in Japan! The proverbial rainy day had come and it was time to see the world.

We returned to Westchester in the summer of 2012, four years and a lifetime later. The transition for my husband seemed to me, effortless. He returned to the same company he worked for in Japan only it was better because he was back in the home office where all the action was. My two oldest children were in college and the two youngest started in the local public school. There were the usual new kids on the block issues but within a few months that was mostly resolved and they seemed happy and excited to be back in New York. I was the one who kept looking longingly at my passport in the drawer of my bedside table. So when the call came from my good friend who I’d met in Tokyo, who also moved back to the US the same time I did, to accompany her to Bangladesh I knew I had to go. One of those once in a lifetime opportunities that you just can’t pass up. Luckily I have the sort of husband who also knew I had to go. The trip was planned and put in my online travel folder and I filed it away mentally as well. Having that on my calendar a year away was both an opportunity for personal growth and a source of uncertainty. Bangladesh?

And then, quite suddenly the day arrived. I had spent the weeks before departure getting shots, debating the pros and cons of different malarial pills and buying every drug for every possible ailment I might experience. The expected temperature for Chittagong was over 100 degrees and it being a Muslim country, where showing skin was not looked upon favorably, long linen pants and tops were purchased. My suitcase was half filled with games like Twister and Memory Board, gifts for the children in the school, which require no English to be able to play, and one very large toiletries kit jam packed to meet any emergency. It would take four flights for me to arrive in Chittagong from New York, one of which was 15 hours long. Did I have doubts and second thoughts? Big time.

My supportive husband kissed me goodbye, my girls gave me the “see ya” not hiding their lack of enthusiasm for my leaving for parts unknown. Sitting in the back of the taxi, as the car left Rye and drove over the bridge, the feelings of doubt and uncertainty about my decision melted away and the realization of why I was going in the first place came back and flooded me with excitement and anticipation. It was finally here, it was real, and I was going to a country on the other side of the world I had only read about in disastrous headlines in the New York Times.

Why the hell not.

7 thoughts on “Bangladesh or Bust”